The Trends and Future Growth of Multifamily Real Estate Amenities

The growth of the multifamily housing market has been driven by both the migration of empty-nest baby boomers looking to downsize into urban communities and the barriers to property ownership facing millennials in the post-recession marketplace. Urban areas remain highly desirable, and multifamily vacancies are generally low i – but competition is strong.

Emerging technologies are giving way to new property amenities that can enhance the profitability of a real estate development, but which may bring regulatory and legal concerns of their own. Early adopters could leap ahead of their competition – or find themselves with costly and obsolete additions that take up valuable space.

It can be difficult to navigate the multifamily real estate market, and it requires careful planning to provide the amenities people want today while anticipating the amenities they’ll want tomorrow – and to take the right steps toward meeting regulatory requirements and limiting legal exposure.

Baby boomers, Generation Xers and millennials span a broad range of potential tenants, but it’s important to at least loosely define the target market when selecting amenities to include and showcase in a property. Each demographic has different needs and desires, even if they do occasionally overlap.

Baby boomers are generally defined as those born between 1946 and 1964. They make up approximately 24 percent of the U.S. population (around 75 million people in 2014).iii Many boomers have already retired or are close to it. They have relatively high home ownership rates, but they may be downsizing – and freeing up their homes’ equities.iv Comparatively high divorce rates also mean that a sizable minority of boomers could be living alone.v

Goulston & Storrs found that baby boomers value secured community access more than any other popular amenities (79 percent). They may be more likely than their younger counterparts to own a carvi rather than taking advantage of the booming ride-sharing economy, so they ranked parking spaces as the second most valued amenity (85 percent). And they consider storage space outside the home to be a hot commodity (42 percent) – the only age group for which this amenity made the top three amenities list. Other desirable baby boomer amenities include:

Generation Xers were born between 1965 and the 1976, putting them between the ages of 41 and 52, and make up roughly 21 percent of the U.S. population (65 million in 2014). viii This demographic spans a briefer period of time – just 11 years – and is smaller relative to boomers and millennials. But that does not mean that they should be ignored.

Members of Generation X are much more likely than boomers to still have young children, and as a part of the “sandwich generation,” may also be supporting aging relativesix. They were hit hard by the 2009 financial crisis,x but they’re also saddled with less educational debt than millennials and are potentially entering the most financially productive phase of their careers.xi

Although millennials are the most highly educated of the three age groups measured in the survey,xiv many carry large amounts of student debt, hurting their ability to purchase and maintain a single-property home.xv For the first time in over a century, this is a generation that is more likely to be living in their parents’ homes than anywhere else.xvi They grew up with the internet, are quite tech-savvy and may be more ecologically aware than their predecessors. While baby boomers and Generation Xers share some priorities, the millennials’ are markedly different.

Their top five amenities are:

Parking, which was highly ranked by both baby boomers and Generation Xers, earns only lukewarm interest from this younger cohort (33 percent). And planning for future technologies was much more highly ranked (40 percent) when compared with baby boomers and Generation Xers. Millennials, however, aren’t as interested in child care facilities (17%).xvii

Over half of all respondents to the Goulston & Storrs survey said that millennials were the demographic most likely to influence multifamily amenity trends over the next five to 10 years xviii – and they’re also the group most likely to show interest in emerging technologies and novel amenities.

The entire concept of transportation is changing drastically in the U.S., particularly in major metro areas. Automated cars and ride-sharing could transform the country’s roads and either reduce or change the need for parking facilities. Multifamily properties that integrate ride-share and taxi pickup/dropoff and bicycle storage could further reduce the need for parking – which can hog tons of space, leaving less room for units and common space. Then, there’s electric cars: In 2016, more than 750,000 electric vehicles were sold worldwide, for a total of 2 million on the road, according to the International Energy Agency. xix All of these electric cars will need charging stations; many city parking garages already offer them, and tenants may expect them at home, too.

When Comcast surveyed U.S. building managers, building owners and developers of multifamily properties, it found that 34 percent ranked Wi-Fi access as their most important amenity, followed by high-speed internet (25 percent).xx The Goulston & Storrs survey echoes this sentiment, showing that tenants of all ages appreciate community Wi-Fi access.xxi With high-speed broadband and Wi-Fi support in place, property developers can also begin reaping the benefits of improved connectivity such as smart in-unit and community features (e.g., Nest thermostats).

Keyless entry – highly favored by older tenants – can also take advantage of this trend, combining easy access with improved security. Additionally, smart units can provide energy and water savings. And refrigerated lockers or secured rooms for food and parcel deliveries – or even drone deliveries – could give a property a huge jump on the competition by allowing residents to conveniently accept home deliveries even if they’re not at home.

By improving the quality and flexibility of communal areas and providing support for telecommuting workers, microapartments could be a good addition to property portfolios, helping developers better optimize their space. Sustainable features (e.g., green rent clauses, energy-efficient appliances and green roofs) are not only increasingly popular, they can be highly cost effective. Some of them carry added financial benefits for the property – for instance, the Solar Investment Tax Credit, which offers a residential tax credit of 30 percent for solar-powered renovations.xxii

Finally, home sharing (e.g., Airbnb, VRBO, Homeaway) is a popular way for renters to recoup some of their accommodation expenses or affordably “house swap” on vacations. Many tenants, after all, are conscious of not being roped into a security deposit. By refusing to allow home sharing, properties could be placing themselves at a competitive disadvantage. To better manage the repercussions of home sharing, some HOAs are setting minimums – for example, subletting for a minimum of one week or even a month – to avoid upsetting other residents with a constant stream of temporary renters.

Over half (53%) of respondents say millennials are most likely to influence multifamily amenity trends over the next 5-10 years. Interestingly, baby boomers edged out Generation Xers in influence, indicating the possible need for senior-friendly amenities and technology.xxiii 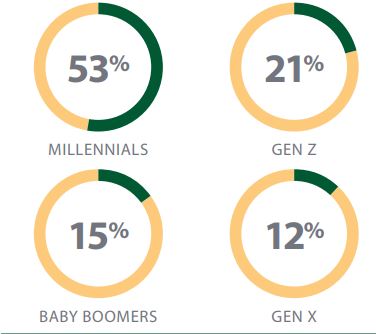 Of course, anything that a multifamily developer or planner might include in a property is subject to regulatory and legal oversight. The Goulston & Storrs survey found that, over the past two years, legal action on properties has remained fairly constant; liability/injury claims are the most likely source of that action. However, three-quarters of respondents did note an increase in regulatory activity, with zoning issues named as the greatest challenge there.xxiv

Multifamily properties must comply with a dizzying array of regulations that cover nearly every facet of a building. It starts well before the doors open – multifamily real estate professionals must consider the environmental impact (CEQA) and health implications of construction, as well as the building’s character, if refurbishing. The latter includes keeping an eye on historical preservation and potential NIMBY (Not In My Back Yard) litigation.

Ultimately, regulatory and building codes are not static, and it pays for multifamily real estate professionals to have legal experts in their corner to help negotiate the maze of red tape – and the web of regulations, from the Fair Housing and Americans with Disabilities and Rehabilitation Acts to state licensing and EPA and HUD guidelines. Firms like Goulston & Storrs, which has a proven track record of successful counsel to clients on matters of liability and regulation – including zoning – can help developers mitigate risk while innovating.

Amenities come with their own special legal headaches, regulatory issues and zoning restrictions.

In an effort to support those who are considering replacing their cars with bikes, cities like San Francisco have enacted ordinances requiring a certain number of bicycle spaces for every new residential unit constructed.xxv But it’s not just a matter of popping in an extra parking spot – proper bicycle storage must balance ease of access with security. Property owners and managers aren’t necessarily liable for anything stolen from shared areas – including bicycles – but these types of petty crimes will negatively impact a property’s value.

High-speed internet is a crowd pleaser, proving very popular with target tenants both young and old. But developers and planners should be wary of making a deal with one provider for an entire complex, as it would breach FCC regulations in many states.xxvi Unfortunately, these rules – which were originally intended to give greater choice to consumers and prevent landlords from profiting unfairly – may have the unintended consequence of reduced-quality broadband services and technology. Developers should do their homework to ensure they’re offering a high-quality service while staying on the right side of the regulations.

Multifamily residential properties can run into some complex – but surmountable – legal problems when it come to the layout and use of communal areas. The risks largely depend on the nature of the feature – a fitness center, a child care center and a dog grooming facility will each have its own issues. Building codes could force significant property amendments even in the absence of green technologies. In the end, real estate developers should always seek professional advice to ensure they’re complying with state and national safety regulations and carrying sufficient insurance coverage.

Over half the respondents in the Goulston & Storrs survey had developments that allowed home-sharing. Of those, almost two-thirds (64 percent) had some issues to deal with. The most common challenges are:xxvii 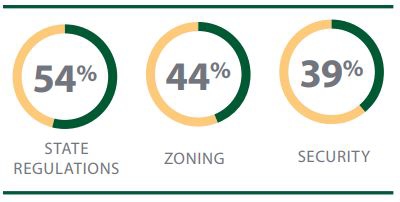 Any multifamily building owner with home-sharing allowances needs to ensure they’re up to speed on state and local regulations – and consider whether additional insurance or a security deposit might be prudent.

CONCLUSION To be successful in the multifamily real estate market, the real estate community needs to meet resident needs while considering that their future needs may shift. By learning and planning around a target tenant’s needs, real estate developers and other professionals can ensure a better return on investment – and avoid spending a mint on features that might be obsolete in five years.

Planning ahead for trends in transportation, connectivity and sustainability could pay dividends in the long run. Also consider where the benefits of an enhancement truly lie. Standout amenities like charging stations or smart lockers might be the deciding factor for a prospective tenant – and smart home efficiency and green tax credits could make a major difference to the developer and owner/manager’s bottom line.

Ultimately, if real estate professionals want to stay ahead, they need to be innovative and smart about developing and implementing multifamily amenities – and that means grasping the nuances of generational demand and the regulatory and legal sphere.